Who comes a long way should tell about it. Our company history is 40 years old – the picture might say more than 1000 words!?
Here some of the milestones. 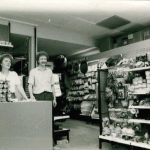 Soon there was a small production for electronic cubes, light organs and various other light effect devices.
All articles were already distributed via shipping. Orders by postcard or letter. Shipping as Post COD shipment. Call it oldschool but it worked.
Until the goods arrived it took 8-10 days or longer. Customers already existed at that time worldwide – ia. from Riyadh, Denmark and, at that time, Persia.
The first “catalog” was a Din A5 sheet and soon expanded to about 60 pages.

In 1977 we moved to the first shop (25m²) – inclusive a small expansion of our assortment to hi-fi systems and disco articles. 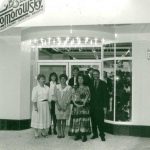 1980 move to a better location in Kitzingen.
The catalog has now become a small Din A5 folder for which “updates” are sent regularly as letter.

1990 So far penultimate move to a larger store (about 100m ²)
The shipping of components, etc. falled back a lot and is then completely stopped. So we had to focus our assortment more onto Car HiFi products and bulbs.
To this time we already started selling mobile phones from the beginning, which later proved to be a rescue, as the big DIY stores took over the market.
2004 After Heiko Somorowsky had joined the team we started the resumption of the shipping business. In the beginning only via ebay.
Since 2007 we created the establishment of the shipping branch in cramped conditions as an additional mainstay

next to the shop.

2014 Relocation to the current location outside the city as we simply needed more space for the shipment of about 100,000 shipments / year. There was a radical assortment on telecommunications products in the store. At the same time, the product range online was increasingly extended to consumer electronics products.
2018 then final task of the store. We needed new office workers. In addition hardly any earning possibilities in the portable radio specialized trade.

This site uses Akismet to reduce spam. Learn how your comment data is processed.